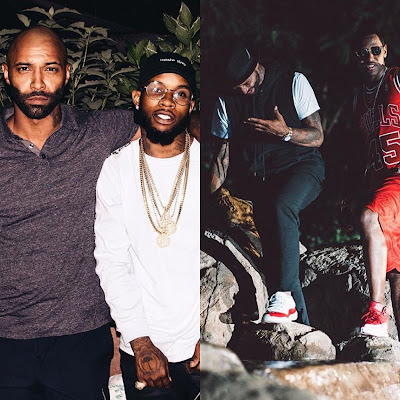 Joe Budden teamed up with AraabMuzik, who produced the track for the single "Flex" to make some dope music. The two also have a collaboration album coming out titled Rage and the Machine. Budden decided to release the visuals for "Flex" today and lets just say that it looks like shooting the video was pure fun.


Featured in the video of course is Joe Budden himself, along side of Araab, Fabolous and Tory Lanez. Also, what's a music video... especially a rap video, with no eye candy?! This video had more than enough beautiful women, featured in some teeny bikinis, doing what they do best which is look Fine for the camera. During a recent interview with Complex,  Araab says the following about shooting the video:
"The "Flex" video was shot like a never ending party, it was lit. Me, Joe, and Tory in the corner playing beats and freestyling, Fab came thru and we turnt all the way up. Just me and my bros doing what we do best with some beautiful women. It got me feeling like the summer's mine."

As for now, there is no date as to when the collabo album will drop, we will just have to wait and see. In the meantime, check out the video for "Flex" below!