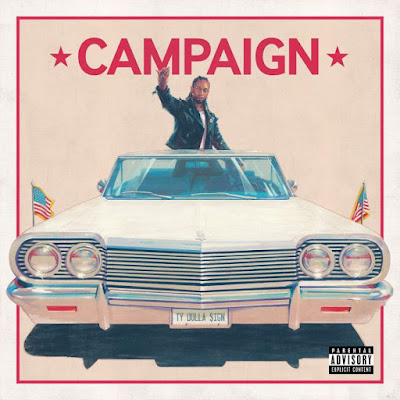 Zamn Zaddy!! That's all I could think of when I heard this new track from Ty Dolla $ign titled "Zaddy". Now if you have been under a rock and have never heard of the term "Zaddy".... its basically daddy, but in a sexier type of way to say it. Fellas, if your girl has never called you this, you need to reevaluate some things! LOL

Ty Dolla $ign dropped some pretty raunchy lyrics on this track, and I am here for this whole song! He talks about running up a check for whoever it is that keeps on calling him "Zaddy". He talks about all the fun that two are going to have in between the sheets, and everywhere else outside of those sheets.
Dolla $ign also just released the tracklisting and cover art for his new album titled Campaign. The album is set to drop on September 23 and will host 16 tracks. There are not many features on the album, however, Future makes an appearance, along with Big TC. You can preorder the album here and check out the tracklisting below. Also listen to "Zaddy" below and see if your feeling it.
﻿
Campaign Track List
$Intro
$
Campaign (feat. Future)
$$$ (Where)
3 Wayz
Juice
Zaddy
Hello
R&B
Stealing
Clean
My Song
Pu$$y
No Justice (feat. Big TC)
Watching
Campaign (feat. Future) *Charlie Heat Remix*
at August 26, 2016