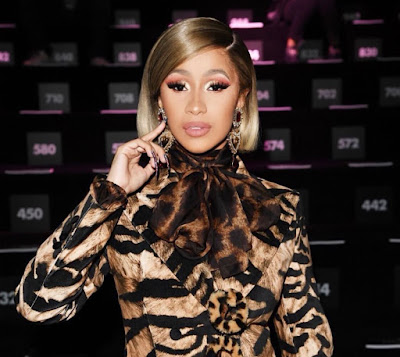 A week ago news surfaced that Maroon 5 allegedly would be rocking the Super Bowl Halftime show in 2019. Along with the information came that Cardi B would possibly be making an appearance to perform the collaborative remix version of "Girls Like You". Cardi seems to have a bigger & bolder plan for herself in 2019.


The Bronx rapper seems to want her very own set at the halftime show to deliver live renditions from her debut Atlantic Records album Invasion Of Privacy. According to new source TMZ the breakout star is currently in negotiations to perform with Maroon 5.

"Our sources say Cardi is in negotiations to perform her remix with Maroon 5, "Girls Like You" & the main issue being discussed is whether or not CB gets a solo set. We're told she's getting a lot of offers to perform in early February ... so she's trying to make the best deal possible."

Aside from the amazing Super Bowl news, Cardi is constantly making industry waves. With the help of Maroon 5 she has scored yet another Billboard Hot 100 hit with "Girls Like You! For the past six weeks the track has been sitting at #2 & has finally made it's way to the #1 spot with 21,000 downloads & 25.4 million streams in the United States & an radio engagement of 127.6 million.

The remix collaboration is Cardi B's third chart-topping that was followed by last years mega hit "Bodak Yellow" & "I Like It" that was another stand out record from her debut album. She has become the first & only female rapper to have three #1 Hot 100 hits.

Email ThisBlogThis!Share to TwitterShare to FacebookShare to Pinterest
Labels: Cardi B, Maroon 5