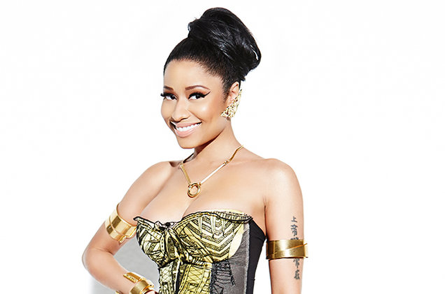 Nicki Minaj continues to prove exactly why she is untouchable & her fans adore her. The rap queen launched the "Regret In Your Tears" challenge that would see a few winners flown out to be with her during the Billboard Music Awards. A adoring fan posed a counter challenge for Nicki, "well you wanna pay for my tuition?". She replied, "Show me straight A's I can verify w/ur school and I'll pay it" said Nicki. She then tweeted, "who wants to join THAT contest?!?! Dead serious. Shld I set it up?".

Minsk's generosity certainly did not stop there as she continued to bless her fans in a very gracious way. 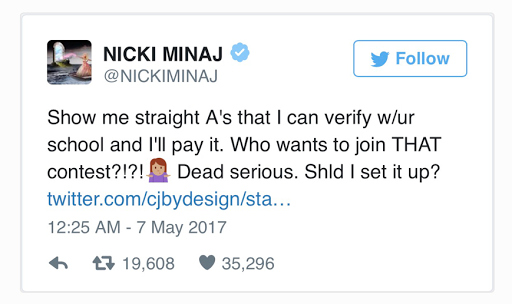 Once fans caught wind of Nicki's offering submissions began to castle pour in. A fan asked for $1,000 & she responded, "that's it? I'll send it tmrw. Dm me ur bank info babe. Next!". Then another fan asked for $500 to purchase books while someone else needed $800 to pay for school courses & books. Once again Nicki replied, "Done, dm ur bank info." 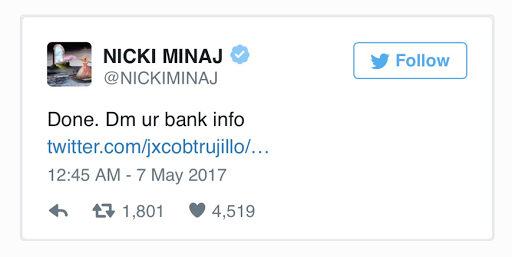 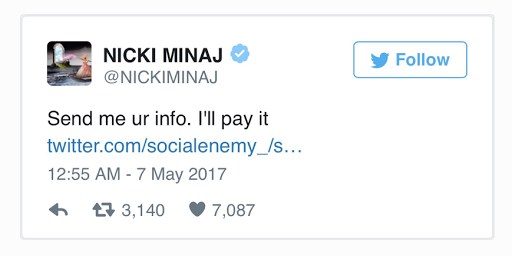 The early Christmas presents for the fans went on for at least an hour. The last one was a request for books, tuition, supplies & a Wacom tablet that cost $2,000. 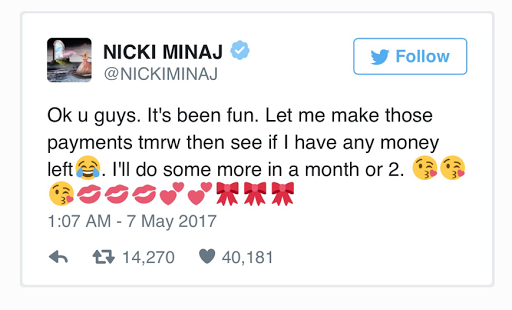 Nicki Minaj has ALWAYS made it her business to tell her fans to stay in school & get a good education. By showing such humbling generosity it shows that she is more than willing to help her fans succeed in life. GO NICKI!!!
at May 07, 2017