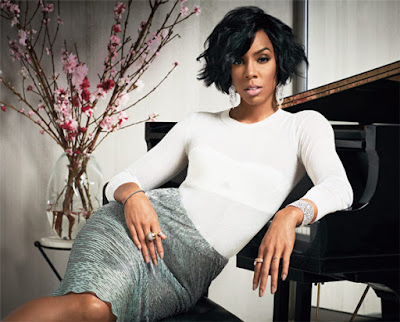 It's been three years since Kelly Rowland's last album Talk A Good Game made it's rounds on the airwaves with singles like "Kisses Down Low" & the heartfelt track "Dirty Laundry", but many are asking where is the new music?

While taking a break from the music she got married to Tim Witherspoon & became a mother to a handsome son. After successfully accomplishing the duties of her new personal life she went onto create the new girl group June's Diary, but now she is back to recording her new album.

The brown boned beauty recently chatted it up with Billboard & gave some fresh insight on why it has taken so long to complete the album & when fans can expect this time around.

Billboard: What new music can we expect from you?

Kelly: I'm trying to close out the record by the end of this year. I told myself to stop [doing other things] and just finish it.

Billboard: What's so tough about completing this LP?

Kelly: Just because I've been gone for so long. I wanted to take that first year to just be a mother, but I wanted to put out music at the same time. I was fighting myself. So then here's the second year, and I've always had some hiccups in between it with other projects that I'm doing. I'm shooting a movie right now, but at the end of this year, I definitely am finishing up the record and I'm releasing it next year. I'm even tired of waiting on it myself, I want to get back on stage, and i want my son to see me on stage. I want him to witness that whole feeling. He saw me at rehearsal a couple months back when I did a video and he was so excited. So the fact that he likes it, I need him to see that again.

The movie that she is speaking about is called The 10th Date, get more details HERE.

Also during the interview Kelly speaks on the BET show Chasing Destiny where she & Frank Gatson choose five ladies & molded them into the world's next big girl group that are known as June's Diary. Read more of the interview via Billboard HERE.
at September 15, 2016