DJ KHALED GETS HIS FIRST #1 ALBUM WITH "MAJOR KEY" 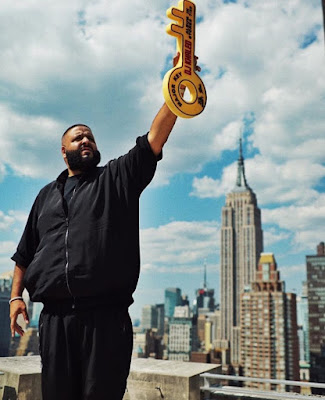 Let's just go ahead and say that it is DJ Khaled's time and he is making the best of it. From being featured in some of the hottest magazines, to rubbing shoulders with the big dogs in the industry and everything else in between. We are now saying Congrats to Khaled again, this time for getting his first #1 album since he has been in the game.


DJ Khaled has been doing music for a while now and it kind of surprising that he just now landed his first #1 album. I mean he has always put out great music and gave some helluva collaborations so I would have thought that he been had a #1 album. Either way it goes, the DJ worked hard on Major Key.... taking time to deliver the fans some great music. This goes to show you that hard work definitely pays off if you stick with something. Also take your time with things, they tend to come out better when it's not rushed and thrown together, as you see with this album.

If you got a chance to listen to the album, then you already know that there are some bangers featured on the album. Khaled got some the dopest collabs on this album and its just like he just got better with time considering that this is ninth LP. DJ Khaled shared the news with fans via Instagram and if you're not genuinely happy for this guy, you are a Hater! With that being said, Congrats to Khaled with everything that is happening to you and for you. Up next, that baby boy!!!