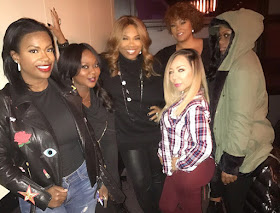 In February all of the members of the r&b girl group Xscape announced that they had reconciled & would be reuniting for future projects. The ladies have teamed up with Mona Scott-Young who will executive produce an upcoming biopic about their lives as a platinum selling group.

Get all the details below.

According to Deadline Mona & her company Monami Entertaiment is currently in the process of shopping the biopic around to various television networks. The made for tv movie will tell the story of all of the members of the group, Kandi Burruss-Tucker, LaTocha Scott, Tameka 'Tiny' Harris, & Tamika Scott & how they rose to fame including the rollercoaster drama that happened off the stage.

Sadly, the TV One network decided to announced that they would also be producing a biopic about the group, but the ladies will not be apart of that project.

“We are excited to join forces with Mona Scott-Young and Monami Entertainment to bring the real Xscape story to the world,” the group said in a joint statement. “This partnership will allow us to tell our story about our lives the way we lived it. It’s our truth about the rise, the fall, and the return of Xscape. We feel the recent announcement of an unauthorized biopic on our lives is disrespectful and disappointing. We are not, in any way, participating in that project and it will never ‘represent’ our true story.”

Scott-Young expressed her excited for the biopic & her involvement, “Xscape has had a huge impact on music and are one of the most successful female groups of all time,” she said. “Monami Entertainment is honored to be charged with bringing the authorized Xscape story to the world.”
Virgil Wilson at 8:30 PM