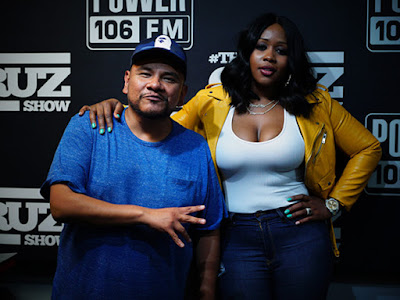 Remy Ma appeared on Power 106 in Los Angeles where she spoke about everything ranging from the current state of hip-hop, rappers who use ghost writers & some random chit chat. Of course, it would not have been a successful interview without Nicki Minaj's name being brought into the conversation.  Remy basically wanted to let her & the rest of the world know that she no longer wants to speak about their beef. During the conversation while talking about Minaj she uttered the words, "you're still mad?"

Watch the interview below.

Hmmm... for someone who no longer wants to speak on the rap beef, she continues to address the situation. I wonder if Remy knows that she can decline to answer any questions regarding Nicki or the beef. Anyway, she is currently recording her solo album since the collaborative album Plato O Plamo that she did with Fat Joe was a certified flop.
at May 17, 2017