CASSIE IS GETTING BACK TO THE MUSIC, ARE YOU READY?! 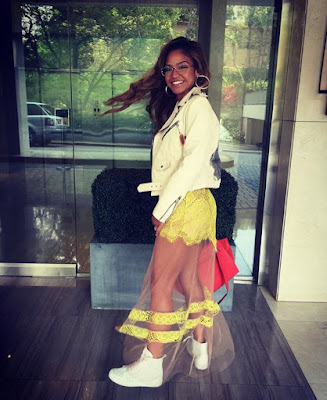 Last night at the VMA's, Cassie dished on working on music and releasing a single soon. The singer spoke with a MTV host on the "white carpet" and talked love and her new single.


Cassie says that her single coming out will be called "Makeup" and the ladies are going to love it. Now every lady that I know loves to have a beat face so if this song is regards to that type of makeup, I'm sure she will have a hit on her hand. The host interviewing Cassie did clear up if the song is about making up or actual makeup, in which Cassie responded "I keep faces for the makeup". Ever since the drama between her and Puff happened a few days ago that involved the police, everybody wants to know the scoop. Clearly there is no scoop to get though because Diddy threw Cassie a huge party for her 30th birthday at his Miami mansion. The party looked hella epic by the way and like Cassie said, "the love is always real" so in other words, get out of their business! LOL

Check out the interview below!
﻿

Email ThisBlogThis!Share to TwitterShare to FacebookShare to Pinterest
Labels: Cassie