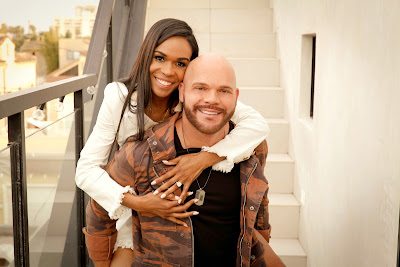 It looks like Destiny's Child alum Michelle Williams is headed to the small screen this coming Fall. Earlier this year in April Williams made the exciting announcement that she has gotten engaged to her boyfriend Chad Johnson. Now her fans will be able to experience their love & see it for themselves as they prepare for their big wedding day on their reality show 'Chad Loves Michelle'.

Yesterday Oprah Winfrey's OWN network made the announcement that Williams & her fiancé Chad who is a pastor will document their engagement on the unscripted series that will premiere on November 3rd at 9pm EST.

“Chad Loves Michelle,” from Relevé Entertainment and InventTV, will feature an honest inside look at the path to marriage between Grammy award-winning singer Michelle Williams, one-third of chart-topping Destiny’s Child, and Chad Johnson, sports chaplain to professional sports organizations. Having been together for a year and never in the same city for more than seven days, the newly engaged couple is turning to intensive pre-marital counseling to help prepare them for life together as husband and wife. Both are relocating to Los Angeles from different cities in the months leading up to their wedding, but not to the same bedroom. Guided by their faith and unwavering values, the couple has vowed to consummate the relationship only after they are wed. Each episode will feature real issues the couple is tackling in their everyday lives, including Michelle’s high-profile battle with mental health issues, and the lessons they learn from the pre-marital counseling sessions that bond them stronger together. Sergio Alfaro, Michaline Babich, Holly Carter, Michelle Williams and Chad Johnson are executive producers.
at September 21, 2018