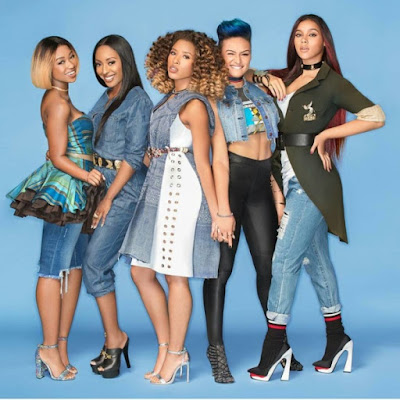 It has been a mere few weeks since the finale of BET's Chasing Destiny, but the world surely has not forgotten about those five talented women. With the help of Kelly Rowland the group has been given a front seat to what their lives as famous music stars will be like & they are off to a great start shooting to the top.

Throughout the course of the televised show the ladies have released a cover of Drake's song "Hotline Bling" & two original songs "It's Alright" & "All Of Us". All three songs flawlessly showcased all of the ladies vocal abilities & what they have to offer the group. Though the group still does not have an official name they will always be known as the ladies of Chasing Destiny, but now it's time to reveal what their name will be.

Find out after the jump.


All five girls sat down on BET's Facebook live to chat with their fans about the experiences of their new found fame & talk about meeting Beyoncé for the first time. They hinted at some possible new music & let the fans know that they should tune into the BET Awards 2016 Pre-Show.

Before revealing the group name they were asked by a fan what producers they would like to work with on music & they named, Harmony Samuels, Tricky Stewart & The Stereotypes. Once again they impressed when they sung "Hotline Bling" a cappella & the harmonies were pure perfection from beginning to end.

The groups consists of Kristal, Gabby, Brianna, Shyann & Ashly but collectively that have chosen the groups name to be:

They explained the meaning of the name, June was the month that they spiritually connected as a group & Diary is about them writing their own story through the music they will be creating for the world to hear.